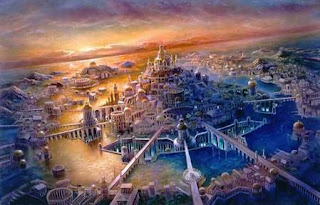 Apologies for the audio on this one, we were seriously let down in terms of bandwidth from Skype on the night of the recording. It's cleaned up as much as we could and we feel it is quite listenable.

In orthodox academic circles, Atlantis is the ‘A’ word. If that terrifying word is uttered, academic ears fill instantly with academic wax and the offending utterer is summarily laughed and/or escorted out of the room.

In PhoenixFire 7 I take a long look at the entire complicated phenomenon. I present an overview of Atlantological history; it’s modern beginnings with Ignatius Donnelly’s ATLANTIS: The Antediluvian World, a vast volume of scholarship first printed in 1888, an instant best-seller, and in print ever since. I then look mainly at the astonishing number of claimants to Atlantis. These, among others, range from the Atlantic Ocean of course, to both the poles, Cypress, Spain, the Altiplano of Peru/Bolivia (believe it or not), and the Caribbean Sea. .

I look closely at Plato’s story, detailed in his Dialogues. For this is the tale that sent Donnelly on his initial search and a scholarly cottage industry was born. With immense advances in all sorts of underwater exploring techniques and excavating equipment besides, it shows no signs of abating.

However, despite the widespread locations trumpeted by adherents as THE Atlantis, all geographical candidates share one premise in common: a strictly literal acceptance of the complex and extraordinarily detailed physical description Plato provides for the huge, rich, aggressive and ultimately decadent civilization that sank to the bottom of the ocean in a single catastrophic day.

At the same time all Atlantologists practice one scholarly dodge in common: when the favored site diverges in some major way (size of site, place of site, age of site, etc) from Plato’s account –and without exception, all do- those divergences are fudged away and/or ignored. Nothing found and loudly proclaimed so far really matches Plato’s tale with anything resembling precision. In other words none of the candidates auditioning for the role actually qualify for it.

So is Plato’s account merely a fabrication? And if so, to what end? Why should he go to all that trouble? Just to confound researchers who will not show up for another two thousand years? It doesn’t make sense. And, along the same lines, are all those avid Atlantologists therefore deluding themselves, and their audiences while they’re at it; not so much barking up the wrong tree, as paddling aimlessly around the wrong ocean?

Definitive answer: yes and no, but it’s complicated. What isn’t?

There is an extraordinary, little-known and erudite book written and published some thirty years ago that, if heeded, without exactly nullifying the Atlantological premise could change the direction of inquiry in radical but fruitful ways.

Musicologist Ernest G. McClain's THE PYTHAGOREAN PLATO decodes the 'A' word as an elaborate musical allegory.

Apologies to all who have been waiting for PhoenixFire 7. I have been extremely busy lately, but we aim to record it next week.
Thanks for your patience.
JAW
Posted by JOHN ANTHONY WEST at 8:06 AM 8 comments: