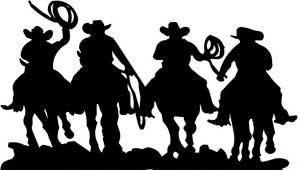 THE FOUR COWBOYS OF APOCALYPSE 2.0

Everyone is familiar with the Four Horsemen of the Apocalypse, though not all know their pedigree. It’s the name given to the revelation of the future granted to St John on the Isle of Patmos. The horsemen themselves are Pestilence, War, Famine and Death (not necessarily in that order, depending upon which reference is consulted.) Their names (which might disincline people from wanting to bet on them in the Kentucky Derby) have made the word ‘apocalypse’ almost synonymous with Doomsday, which is, strictly speaking, incorrect. It derives from a Greek word meaning to ‘reveal’ or ‘disclose’ and by extension , it means a prophesy or vision of the future, not necessarily an ominous one.

Doomsday is quite another matter, more appropriately linked to another familiar word from Revelation, Armageddon, the site of the final decisive battle on the Day of Judgment, in which the Lamb bests the Whore of Babylon … and throngs of otherwise certifiable people are whisked off to heaven. It’s not easy to make rational sense out of Revelation (which doesn’t mean it can’t make sense on some other level) but it does read like it’s been written on something at least as potent as ayahuasca, though there’s no record of John visiting the Brazilian rainforest. On the other hand, who knows what they had growing on Patmos?

In any event, The Four Horsemen are pretty obvious. They ‘ve been around and universally active since long before St. John’s time and still are; no surprises there, and no need for further elaboration beyond perhaps noting that of the four, only War is directly attributable to errant, defiant, violent humanity. Unless, of course, it is argued (and so it is by some) that the other three horsemen are set loose in divine retribution; for a variety of human abominations –homosexuality, pre-marital sex, smoking or ingesting illegal substances, not wearing a seat belt, and so on.

The Four Cowboys of Apocalypse 2.0 are much less obvious, yet in one way or another they aid and abet the original Four. In the Walt Disney 3D, HD Western/Action-Thriller/Horror/Farce called Western Civilization, they are the self-appointed posse, riding white geldings; wearing white Stetsons, galloping roughshod over the globe and spreading ‘tidings of comfort and joy’.

When examined closely, The Four Cowboys are no less destructive than the original Four Horsemen, maybe ultimately more so since they come in disguise. All of them are played, with characteristic ineptitude, by John Wayne. They differ from the Four Horsemen in that they are all, each one, directly and unmistakably human generated.

They are: Capitalism, Patriotism, Democracy and Technology

The role of Capitalism is easiest to understand, almost obvious in fact, except to the leaders and economists of almost every country in the world. This Cowboy occupies the whole of PF9, which may sound excessive, but is nevertheless appropriate, since it is this Cowboy that is largely responsible for the financial debacle now unfolding globally, and from which there is no foreseeable release or return.

The other three Cowboys will be discussed in subsequent PhoenixFires.