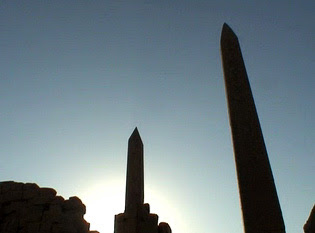 Here's a promo for my tours that we just shot in Egypt during March 2007.

PhoenixFire 6 will be delayed until about the third week in April due to my travel commitments.
Posted by JOHN ANTHONY WEST at 8:22 AM 1 comment:

Son of Mystery of the Sphinx, part 3.

The book of Boris.

RIP. Boris Said.
My ex-partner (and ex-friend) Boris Said died on March 24, 2002 of liver cancer, aged sixty-nine. Those on this list who have been following the long, convoluted progress of the Sphinx theory and all that relates to it may be familiar with Boris's name and with his role in producing our video, MYSTERY OF THE SPHINX. Without that video, the theory and all the rest would be relegated to a distant back burner on an obscure stove somewhere. Boris's name and his memory are tied in my mind inextricably to that project.

Those who met Boris at any time over the course of his 69 years, even briefly, probably will not have forgotten him; physically powerful, radiating an almost superhuman, high octane intensity, with a quick, coarse humor and and even quicker, coarser temper, infinitely resourceful especially when his back was to the wall -- which it usually was, since he found ways to make sure that's where it stayed. Boris Said (pronounced Sa-yeed - half Russian, half Persian) was a memorable, unique (well, we are all unique, but some are more unique than others) larger-than-life character, ex-race driver (Ferrari/Porsche -- sports cars, never made Formula driving) ex-Captain of the U.S. Olympic Bobsled team, absolutely fearless; a man of endless anecdotes, endlessly dreaming up admirable projects, indefatigably organizing film crews, support, sponsors, finances and then, almost as if programmed, finding ways to sabotage these projects just prior to completion, bringing everyone involved down with the ship, including himself. As self-destructive as he was destructive, Boris made many enemies; and unfortunately kept but few friends.

One of these days, in the multi-volume autobiography I work on sporadically, the Book of Boris section will be vivid reading, and it won't be brief. I do not know exactly who or what the demon was that drove him, but driven he was, only very rarely arriving at his chosen destination. There was a memorial service for him in New York, attended, I'm told, by a couple of dozen people he'd somehow managed not to alienate. I wasn't included in the invitation list; perhaps because it was feared I might stand up and say pretty much what I'm saying here, and I would have, so this was a wise decision. (I can never understand this custom of eulogizing people at death no matter what their faults may have been or how much havoc they may have caused in life. What's the point? Is the ka of the deceased hovering about, and hearing everyone spouting a lot of well-intentioned baloney, it says to itself: Gee, I guess I wasn't such a louse after all? This is not esoteric philosophy as I understand it!)

Why not just tell it as you see it; the good and the ill?) In this case, while others might have been at that service largely because they'd never actually been burnt by Boris, I might have been the only person there who had something specific to be actively grateful to him for, and so might have made a unique contribution to the gathering.

MYSTERY OF THE SPHINX was, I think, the only one of Boris's many projects that made it to completion and a showing. Without him that video would not have been produced or launched. At the same time, it was only through the concerted efforts of the rest of our crew, realizing along the line how destructive and divisive he was and uniting to prevent him from scuttling it before it was complete, that we managed to rescue it. It was a hair's breadth escape at that. Later we learned he'd managed to plunder close to $150,000 out of the till along the way. So, successful as the show was, (one of the most successful documentaries ever made) it ended up, and to this day remains, deep in the red.

But MYSTERY OF THE SPHINX is not just another documentary. A financial debacle it was, certainly; but much more than finance is at stake in terms of science, scholarship, the history and possibly even the future of human civilization itself. If our Sphinx theory is endorsed by the geology panel we intend to bring to Egypt in the near term future, and if that produces the desired impact, forcing a radical rewriting across a spectrum of disciplines, Boris will have played a key, unique and absolutely essential role in that process. Nobody else could have or would have done what he did. Without him there would be nothing.

I do not know if plea bargaining is allowed in the Great Court of Osiris, but if it is, I like to think that his role in making this show happen, thereby generating all that followed...(and that is yet to come) will be placed on the feather-side of Ma'at's balance. For the heart side, I suspect, will not be light.

While we were working on the show, before relations got edgy, and long before I realized the extent of the wholesale financial plunder, Boris started calling me Pharoah (a role I was never very comfortable with! Royal Scribe, maybe, OK. But Pharoah? No ... not my style.) Anyway, I retaliated by calling him 'General' for which he was, at least in principle, much better suited. I can think of nothing Boris would like less in death than to have people wish him: Rest in Peace!

My own posthumous message would be: No, don't rest in peace. Charge!!! But this time, if you're given another chance on that battlefield, train your weapons on the enemy! Not on your own troops and yourself! Understood?